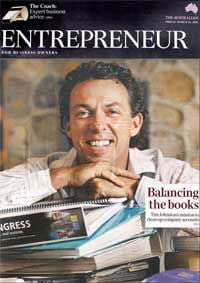 Bookkeeping tailored to the client’s story

IN an increasingly online world it is comforting to know that a bricks and mortar business can still make a fast start to business – even if it is someone else’s bricks and mortar.
Books Onsite started in 2006 and was the brainchild of a creative accountant, Tim Johnston, who suspects his entrepreneurial inclinations were bred “at sea”.
“My father was a ship’s captain who was always trying to find a way to make a living ashore by trying different ventures, including property development, a yacht hire business and inventing his own anti-dandruff shampoo,” he recalls. “But it stank of dettol”.

The company aims to deliver strength where many small businesses are weak. On the flipside, Johnston’s bookkeeping business, which is actually more than this, has come up smelling of roses after taking out a number of business awards, including being Named in BRW’s fast starters list.
“Although we market ourselves as bookkeeping services, we provide more of a management accounting role to our clients in Sydney, Melbourne and Brisbane,” he says.
“Most of our staff are either degree, chartered accountants or CPA qualified and we look after the bookkeeping side of things such as accounts payable and receivable management, bank and credit card reconciliations and payroll.”
It is apparent that Johnston has positioned the company to deliver strength where many small businesses are weak. But it is more than this. His business does not do tax returns, which can blindside accountants, meaning they fail to become advisers to their clients.

Business owners often complain that their accountants seem more like an outpost for the tax office rather than a partner in their business. Johnston has seen this and and learnt from this observation.
“In addition to traditional bookkeeping we look to add value as more of a management accountant by helping business owners measure and forecast performance through providing accurate and timely profit and loss accunts, actual versus budget comparisons and cashflow forecasts,” he says “We also manage compliance for superannuation, BAS's and ASIC returns.”
The strategy was decided on early in the piece that Books Onsite would specialise in onsite bookkeeping but not tax returns. But the point of

The company aims to deliver strength where many small businesses are weak difference was to be that the business’s team, as they were a CPA practice in their own right, would be able to communicate effectively with the clients’ existing tax accountants.

It was smart stuff for the sole founder of the business to note three failings in the bookkeeping/accounting world. First, many bookkeepers are not well qualified and it means accontants often take issue with their entries and decision processes.
Second, accountants see the bookkeeping software often used by small business, as Johnston suggests, “beneath them”. Finally, some accountants are so busy with tax returns they don’t know their client’s business well enough to be good advisers.
And bookkeeping serves as a perfect “in” to establish a relationship with a customer and then it’s only a matter of developing the relationship by adding value.
Bookkeeping is interrelated to cashflow and this is the main killer of businesses. Most businesses would love an in-house financial controller, debt chaser and cash monitor, so Books Onsite is a price-competitive alternative.

“We have a minimum service level of one full day per week,” Johnston says. “We normally lock in a regular day or days per week so that everyone knows which day to make any accounts-related inquiries.”
Johnston worked in various accounting roles in the private sector for 10 years, including a stint in PNG with ASX-listed company Downer Engineering Australia.
He jumped ship and gave in to the call of the entrepreneurial “wild” in 2001, starting up his own CPA practice, and that’s when he saw the hole in the market that needed to be filled.
“I recognised many clients were having difficulties finding quality bookkeepers,” he says. “It can be difficult for some business owners to assess the quality of their bookkeeper until the tax accountant reviews their accounts at year end.”

Johnston says the typical mistakes that result from second-rate bookkeeping are double payment of invoices, incorrect calculation of payroll, including leave and super entitlements, and incorrect coding for GST. And making matters worse, he argues, sometimes these errors cannot be rectified if not picked up immediately.

While Johnston has grown a face-to-face business, it doesn’t mean he is an anti-IT Luddite. “I have always had a passion for finding efficiencies in the ways things are done, so I make sure I am up to date with any new technologies that

BEST PIECE OF BUSINESS ADVICE YOU GOT
“The most powerful factors in the world
are clear ideas in the minds of energetic men of goodwill.” – Scottish naturalist J. Arthur Thomson

THE WORST
“Your’re spending too much money on
marketing.”

FAVOURITE MARKETING
TECHNIQUE
Writing articles about bookkeeping and
distributing them through PR agencies.

"I have always had a passion for finding efficiencies in the ways things are done, so I make sure I am up to date with any new technologies that can improve systems and hence save time and money for our clients.”

can improve systems and hence save time and money for our clients.”
That said, Books Onsite has used more traditional marketing methods to build the brand, with a bit of online.

Johnston says he uses press releases, which he composes himself, online and print advertising, but he has also leveraged off business awards in business publications. He also thought the business benefited from the fact that he placed a very high value on his independence and the fact that the company did not take commissions for any cross-referrals.

This kind of approach is good for word-of-mouth referrals. And if success came from new age marketing strategies, search engine optimisation or proactive networking, they have not explained Books Onsite’s success. Johnston’s self-promotion technique is as old fashioned as bookkeeping itself. “I’d much rather learn about a person, rather than what they are trying to sell, in a social environment, so we have never been any good at marketing,” he says. The old-fashioned approach seems to be working: the business employs 50, including 20 full-time staff, and has revenue in excess of $2 million. When asked about his own business’s main challege, it is the major problem his business was set up to crush: the cash crisis. But true to accountant’sform he devised a system that brought the pressure down.

“Cashflow was the major challenge when building the business,” he says. “We implemented a direct debit system of payment where all of our clients’ bills are processed seven days after they are sent out at the end of each month.”
This innovation was seen as a key turning point in his business as it eliminated the pressure of significant clients who were slow payers. Another business builder was winning over bigger clients who permitted him to refer to them in his advertising, which helped to build the brand and trust of the fledging business.
So, what’s the goal that drove this business along?
“I wanted to spend more time fishing,” Johnston admits. “I didn’t have any grand ideas when I started the business; it was more for health and lifestyle reasons.”

The time fishing might not have worked out as planned, but he says he does spend more time with his wife and two boys, and he also manages a fair bit of kite surfing.
“I do have ambitions to continue to grow Books Onsite but not at a pace that may comprimise the quality of our service,” he says. “I love whatwe do, so I do not have any kind of exit strategy at this stage.”
Unlike other bookkeeping businesses, he has avoided franchising but it has not meant that Johnston has had to work hard.
“In the early days you have to be very hands-on and I would do new client set-ups myself initially,” he says. “I now have managers in Brisbane, Sydney and Melbourne to assist with this and my focus is on recruiting and training quality staff and also handling new client inquiries.”
On what has inspired him in building his business, Johnston nominated Virgin’s Richard Branson and Michael Gerber’s book E-Myth.

“My training as an accountant taught me to be conservative with money, which is how you want your accountant to be when they are dealing with your accounts or finances,” he says. “My business style follows on from that to a certain extent in that I am a traditional low-debt, low-risk operator.”
“When I look at Richard Branson’s life, he repeatedly risked everything for growth and although I could never do that, he does inspire you tocontinually challenge yourself and not rest on your laurels.”
On E-Myth, he pinpointed his biggest take-out.
“The best lesson I learnt from E-Myth was ‘leverage’,” he says.
“You may be technically best at what you do, but if you can’t leverage that within your business so that your staff can provide the same standard of service or product as you can personally, you have put a ceiling on your growth.”
On the future, Johnston is shooting for more growth and expects to helped by a government crackdown on bookkeepers. “The Tax Agent Services Act 2009 means there will be quite onerous requirements in terms of qualifications and experience to provide BAS services, which is a large part of bookkeeping,” he says.
“This will help insure that there is a higher standard of bookkeepers within the industry.”
One man’s threat is another’s opportunity.

Peter Switzer is a founding director of Switzer Business Coaching

www.switzer.com.au
« Read other recent articles about us

What can bookkeepers help with?

Bookkeeping: Doing It Yourself vs. Outsourcing To A Bookkeeper

What should you look for in a bookkeeper?

If you are a Small or Medium Legal Practice with less than 20 Practitioners we can look after your bookkeeping and trust audit remotely for a fixed fee.
Explore

Taking the traditional approach to Bookkeeping is no longer an option. Allow Books Onsite to tailor an always online and available bookkeeping service targeted specifically for your business.
Explore

Our team of real estate bookkeepers will ensure your rental and sale trust is updated daily. We will include your general bookkeeping and trust audit in our remote fixed fee.
Explore